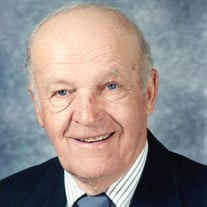 Victor Stephen Koslosky, age 99, passed away peacefully on Saturday, November 20th, 2021 in Akron, Ohio. He is survived by his son, John Victor (Victoria) Koslosky and their children, Caroline and Elizabeth Koslosky. He is also survived by his stepdaughter Karen (Bill) Postellon Robbins from Dumfries, VA, his daughter-in-law Mary Chamberlain Postellon from Grand Rapids, MI, grandchildren Stephen (Teresa) Kasperick-Postellon and Sarah (Cory) Dolley, and a large extended family. He was pre-deceased by his wife Helen Salapow Postellon Koslosky and his stepson Daniel C. Postellon, M.D. of Grand Rapids, MI, as well as his parents and five siblings. Victor was born in Crabapple, PA on August 26, 1922 and grew up in Star Junction. He served in the Army during World War II, stationed in Panama. In 1949, he earned a degree in Industrial Engineering from St. Vincent College, Latrobe, PA where he also lettered in baseball. After briefly working in Cleveland, Ohio, he returned to Pittsburgh, PA where he met his wife Helen Salapow Postellon during a minor office fire, and sparks flew! They married in 1959 when he became the stepfather to 15 y/o Karen and 9 y/o Daniel Postellon. In 1962, he and Helen had their son, John Victor. He eventually retired from RCA in 1982. Vic was an avid golfer and made many friends over the years through his beloved sport. He also enjoyed fly fishing and was a skilled grouse hunter, training several talented bird dogs. Vic enjoyed bowling leagues, family reunions, and at the age of 70 took up yoga and massotherapy. He volunteered every Tuesday for the Greater Pittsburgh Community Foodbank for many years. For the better part of 50 years he was a member & usher at the Nativity Catholic Church in South Park, PA. Friends will be received on Monday, November 22nd from 2-4 p.m. and 6-8 p.m. at the GRIFFITH FUNERAL HOME, INC., 5636 Brownsville Road, (at 6th St.) South Park Twp. (412) 655-4600. Funeral prayer Tuesday, November 23rd at 9:30 a.m. at the funeral home, with a Mass of Christian Burial in Our Lady of Hope Parish - Nativity Church at 10 a.m. Condolences may be offered for the family at www.GriffithFH.com

Victor Stephen Koslosky, age 99, passed away peacefully on Saturday, November 20th, 2021 in Akron, Ohio. He is survived by his son, John Victor (Victoria) Koslosky and their children, Caroline and Elizabeth Koslosky. He is also survived by his... View Obituary & Service Information

The family of Victor Stephen Koslosky created this Life Tributes page to make it easy to share your memories.

Send flowers to the Koslosky family.