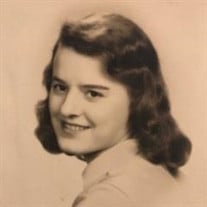 Sara “Ann” Bittner (Dieringer) passed away on April 15, 2020, at the age of 86. She is survived by her four daughters, Linda, Jill, Kathi (Daniel Nevils) and Mary (Rick Perrotte), her grandchildren Brittany Perrotte and Corey Perrotte, and numerous nieces and nephews. Ann was preceded in death by her parents, Eva and Earl Dieringer, her husband John "Jack" Bittner, her seven siblings, many friends, and her beloved dachshund, Scrappy. Ann was born in Pittsburgh on Feb. 2, 1934, along with her twin sister Margaret. They were the youngest of Earl and Eva Dieringer’s eight children. Ann grew up in Lawrenceville and graduated from St. John the Baptist in 1951. She married her husband Jack and they raised their four daughters in the same neighborhood she grew up in. Once her children were grown, Ann lived in the Houston, TX, area for many years, where she proudly worked as a grocery store deli manager, setting the standard for how the company set up those departments. She traveled the state for a few years before retirement, consulting with store managers and training department heads, a position she thoroughly enjoyed. After retirement, she helped out at the front desk of her daughter’s dance studio and then volunteered at Tomball Regional Hospital. Through Parents Without Partners, Ann discovered her more adventurous side and embarked on trips to the UK, China, and Thailand. She also loved cooking and baking, which she used to create family holiday traditions that she passed on to her daughters and grandchildren. Ann could often be found with a crossword puzzle, mystery novel, or deck of cards in hand, remaining lifelong friends with the ladies from her card club. Ann loved music and dancing, and she kept on dancing along to her favorite Johnny Mathis songs “every step of the way” through her fight against Alzheimer's disease, even at the very end. Services will be held privately for the family. Arrangements by GRIFFITH FUNERAL HOME, INC., South Park Twp. (412) 655-4600. If desired, the family suggests that memorial donations in Sara's name be made to the Alzheimer's Association, P.O. Box 96011, Washington, D.C., 20090-6011. Condolences may be offered for the family at www.GriffithFH.com

Sara &#8220;Ann&#8221; Bittner (Dieringer) passed away on April 15, 2020, at the age of 86. She is survived by her four daughters, Linda, Jill, Kathi (Daniel Nevils) and Mary (Rick Perrotte), her grandchildren Brittany Perrotte and Corey Perrotte,... View Obituary & Service Information

The family of Sara "Ann" Bittner created this Life Tributes page to make it easy to share your memories.

Send flowers to the Bittner family.