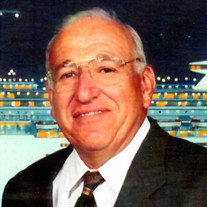 On Sunday, August 1, 2021, Louis "Lou" Melani, Jr., age 88, of Baldwin Borough, passed away unexpectedly at his camp in Tidioute. Son of the late Louis Melani, Sr. and Fidalma (Guastini) Melani; beloved husband of the late Thelma (Entinger) Melani; loving father of the late Michael D. (survived by Rita) Melani; grandfather of Matthew Paul Melani; brother of James J. (the late Eunice) Melani and the late Harry (survived by Albina "Bea") Melani; dear friend of Patricia D'Amico; also survived by nieces, nephews, and many friends. Lou was a U.S. Army veteran of the Korean War, and later a property manager for Prudential Realty Company. Lou was mechanically gifted and could fix anything, even in his later years. He was a hard worker who never stopped moving, and he never hesitated to drop everything to help with someone else's project. Lou loved to travel, especially with his late wife Thelma. They would travel anywhere that they could, and particularly loved going on cruises together. Lou spent a lot of time in Tidioute, which was like a second home to him. He loved hunting, especially with his late son Mike. Despite suffering his share of losses, nothing seemed to bring him down. Though he will be dearly missed, he will always be remembered for his constant smile and positive attitude. Friends received Thursday from 2-8 p.m. at the GRIFFITH FUNERAL HOME, INC., 5636 Brownsville Road, (at 6th St.) South Park Twp. (412) 655-4600. Funeral prayer Friday 9:30 a.m. at the funeral home, with a Mass of Christian Burial in Our Lady of Hope Parish - Nativity Church at 10 a.m. If desired, the family requests donations in Lou's name to St. Jude Children’s Research Hospital, 501 St. Jude Place, Memphis, TN 38105, or to the Wounded Warriors Project, P.O. Box 758516, Topeka, Kansas 66675. Condolences may be offered for the family at www.GriffithFH.com

The family of Louis Melani Jr. created this Life Tributes page to make it easy to share your memories.

Send flowers to the Melani family.