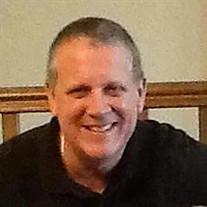 James "Jim" M. Frederick, 62, of Pittsburgh, PA, passed away peacefully at his home on January 15, 2022. Born April 17, 1959 in Pittsburgh, Jim was the son of the late Merle Frederick and Mary (Domen) Frederick. He graduated in 1977 from St. Elizabeth High School in Pleasant Hills and received his Bachelor's Degree in Printing Management from Rochester Institute of Technology (RIT) in 1981. Jim followed in his father’s footsteps by dedicating his career to the newspaper industry, where he held production management positions at The Toledo Blade and The Pittsburgh Post-Gazette. Jim is survived by his two children, Ashley (Richard) Eyles of Radnor, Ohio, and Andrew (Pui) Frederick of Oakland, California. He also leaves behind a sister, Mary Kay Frederick of Finleyville, PA. Those who knew Jim would agree that he was a stoic, humble, and sincere man, who relished the company of those closest to him. His favorite activities included golfing, grilling on his patio, listening to music, and enjoying a cold beer or two. Over the years, Jim enjoyed taking in the beauty of nature when walking the trails at South Park alongside his loved ones. Many of his favorite memories were the times he visited the buffalo at the park with his children throughout the years. More recently, he had been enjoying walks with his sister and her five dogs, visiting with his children, and “grand pups." Jim’s kind smile, laughter, and gentle nature will be greatly missed by his family. The family has chosen to have a private memorial service. Arrangements by GRIFFITH FUNERAL HOME, INC., 5636 Brownsville Road (at 6th St.), South Park Twp. (412) 655-4600. Condolences may be offered for the family at www.GriffithFH.com.

James "Jim" M. Frederick, 62, of Pittsburgh, PA, passed away peacefully at his home on January 15, 2022. Born April 17, 1959 in Pittsburgh, Jim was the son of the late Merle Frederick and Mary (Domen) Frederick. He graduated in 1977 from St.... View Obituary & Service Information

The family of James M. Frederick created this Life Tributes page to make it easy to share your memories.

Send flowers to the Frederick family.