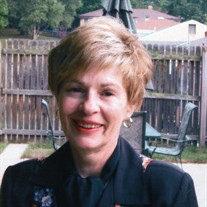 Geneva (Fournier) Darr, wife of William Joseph Darr and daughter of the late Arthur P. and Eveline D. Fournier, of Waterville, Maine, passed away peacefully at age 83 on Sunday, August 15, 2021 at Paramount Senior Living in Peters Township. She is survived by William, her husband of 61 years, and her beloved sister Claire Fournier Wilson. Those who knew Geneva enjoyed her remarkable sense of history and style. In an era where both of these qualities were demanded in high-end retailing, Geneva graduated from Boston's Chamberlain School of Retailing, and was immediately employed by Jordan Marsh of Boston, originally the nation's first "department store," occupying a full Boston city block. Her time as a Buyer there was among her most enjoyable. During that time, Geneva also met her husband-to-be. William Darr and Geneva were married in the Sacred Heart Catholic Church in Waterville, ME on June 18, 1960, and relocated to Bethel Park, PA in 1965, subsequent to William completing his graduate work at MIT. Geneva never ceased enjoying her many interests, ranging from historical and genealogical research to breeding and showing Basenji dogs, and was a true and faithful friend and companion. She will be keenly missed. Friends received Wednesday from 2-4 and 6-9 p.m. at the GRIFFITH FUNERAL HOME, INC., 5636 Brownsville Road, (at 6th St.) South Park Twp. (412) 655-4600, where a Blessing Service will be held on Thursday at 11:45 a.m. Interment will take place on Monday, August 23 at 1:30 p.m. in the National Cemetery of the Alleghenies. Those attending the burial are asked to please meet at the funeral home by 12:30 p.m. Condolences may be offered for the family at www.GriffithFH.com

The family of Geneva (Fournier) Darr created this Life Tributes page to make it easy to share your memories.

Send flowers to the Darr family.