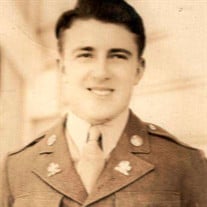 Anthony J. Merlock, 98, passed away peacefully on Thursday, April 30, 2015, in Virginia Beach, VA. He was preceded in death by his beloved wife, Irvia “Eve” Merlock, his parents Anton and Mary Merlock, and five siblings – Mary, Frances, and the triplets Edward, Albert, and Alberta. He was a first-generation American, World War II veteran, and unsung mechanical genius who could fix almost anything. In many ways, Tony embodied what makes Pittsburgh unique, if he did so more quietly than many. Born on February 28, 1917, in Broughton, PA., to Slovenian parents searching for a better life, he was old enough to remember Lindbergh’s crossing and dropped out of school to help his family survive the Great Depression. In 1937, he became a blaster for Pittsburgh Coal Co., tamping black powder into the coal face and shooting the coal – one of a mine’s most dangerous jobs. Such experience led to his assignment in WWII as a mine assembler for the 307th Infantry Regiment; he detected and dragged floating mines from New York Harbor for disassembly, then was sent to the Philippines after V-E Day to do the same. When asked what that was like, he answered, “You didn’t mess around.” He served in the occupation forces after Japan’s surrender and, after his 1946 discharge, married a first-generation Italian girl. He worked for more than a quarter-century as assistant foreman of a maintenance-of-way gang for the former Norfolk & Western Railroad, laying track, repairing switches, and clearing derailments in the dead of winter. In contrast to such hazardous work, Tony was a quiet, gentle, and generally unruffled soul. The strongest language one heard from him was “gosh almighty!” But if there was a problem, he got the job done – that seemed his motto. If something broke, one could see the mental wheels spinning; then he’d disappear to his tool-bench and emerge with some tinkerer’s miracle. He once pointed out a towering railroad bridge near Mount Washington: “I was up there many winters,” he said. When asked what that was like, he answered, “It was cold.” He was a lifelong gardener and waged constant warfare against marauding deer from South Park. The deer usually won. Groundhogs, on the other hand, rarely stood a chance as they waddled towards his zucchini. In 2013, he moved to the Bay Lake Retirement Community in Virginia Beach, where he was known for his tomatoes. He is survived by a son, Dr. Raymond J. Merlock; a daughter, Dr. Kathy Merlock Jackson, and her husband Joe; a grandson, Nicholas Merlock Jackson; a sister, Margaret Yankovich; two goddaughters, Noreen Ranallo and Marie Fasano; and many friends. Visitation will be on Friday, May 8th, from 6-8 p.m. at the GRIFFITH FUNERAL HOME, INC., 5636 Brownsville Road, South Park Twp. (412) 655-4600. Funeral prayer Saturday 10:15 a.m. with a Mass of Christian Burial in Nativity Church at 11 a.m. In lieu of flowers, contributions may be made to Nativity Catholic Church. Condolences may be offered for the family at www.GriffithFH.com

The family of Anthony J. Merlock created this Life Tributes page to make it easy to share your memories.

Send flowers to the Merlock family.