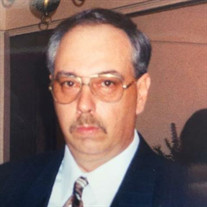 Alan Raymond Shinsky, age 70, on Saturday, March 13, 2021, in Millville, NJ. Alan (Lanny) is survived by his four children, Alan Shinsky, of Elizabeth, PA, Deena (Chris) Skwortz of Coraopolis, PA, Adam (Shannon) Shinsky, of South Park, PA, and Lindsey Shinsky, of Millville, NJ. He is also survived by four grandsons, Alex Shinsky, Christian and Dawson Skwortz, and Greyson Scott. He will also be missed by his canine companion Remi, and Adam’s dog Shadow. He is preceded in death by his parents, Alexander and Elsie (Strompl) Shinsky, of Baldwin, PA, and his sister Eileen. Alan was born on April 2, 1950 in Baldwin, PA. He enjoyed hunting, fishing and working on cars. Due to current restrictions a memorial will be held at a later date. Arrangements by GRIFFITH FUNERAL HOME, INC., (412) 655-4600. Condolences may be offered for the family at www.GriffithFH.com

The family of Alan R. Shinsky created this Life Tributes page to make it easy to share your memories.

Send flowers to the Shinsky family.